Summer 2022 is a debuting season for many tempting shows. Among these shows is “Engage Kiss”. The show is getting popular at a rapid speed, so keeping that in mind, we are here to recap the latest episode (episode number 6), “Third-Party Demon Killer.”

So without any further ado, let’s get started!

The anime revolves around a guy named Shuu Ogata, a young demon exterminator. He lives in Bayron City, which is a huge floating city built on a newly discovered energy source called orgonium.

Although the city promises its citizens to provide a luxurious lifestyle, nonetheless Shuu’s life is far from extravagant; even though he runs his own private military business, he still has a hard time bringing food to the table.

Kisara is a demon that helps Shuu with his money and house chores problems, so much so that it kind of makes him uncomfortable. Meanwhile, Ayano Yuugiri, a senior colleague of Shuu, also helps him out with his business, making Kisara dislike her.

The three of them fight side-by-side to exterminate the demon Hazard, which poses a big threat to the city. However, there’s a catch to this noble cause to protect the city, which is yet to be revealed.

The episode starts with the appearance of a new character dressed as a nun; she appears to be looking for Kisara. Meanwhile, Shuu, in his apartment with Ayano, is wondering where Kisara is since she hasn’t been visiting him for a while.

Kisara, on the other hand, is sitting under the bridge, upset with Shuu for what he did with Ayano. She ends up reminiscing about the past when she was stuck in the cave with a sword stabbed in her chest. The one who pulled the sword out for her was Shuu; he asked Kisara for a contract with him needing her powers. The seemingly wild Kisara, who does kill without hesitation, calmed down on hearing this.

Later on, the agents of AAA company are ambushed by the nun during the D hazard investigation. She engages with Justice (the blond hair man) without any notice; her movements so fast that she is able to immobilize him within seconds.

She also wants to ask about Kisara, but the police arrives with backup, and she is forced to escape through the window, taking one of the exterminators.

Meanwhile, Shuu is on his way to meet that suspicious informant and make a direct deal with him. He arrives to the meeting place and waits as instructed by this informant. When he suddenly appears behind Shuu, forbidding him to look back. Shuu asks the informant what’s his real goal for helping him?

He dodges his question and asks Shuu to dig through the trash bin, where he finds a tablet with the Photograph of 8 minutes ago (the nun incident).

According to the informant, she’s a dangerous person from Celestial Abbey, and they don’t need her in this city. Saying this, the mysterious informant disappears in thin air. Despite all the monitoring backup, Shuu’s is unable to capture the informant while he escapes.

Afterward, the demon-exterminator council is called to discuss the incident at the abandoned building. Midway through, Shuu realizes that the intel is much slower here than his mysterious informant.

Shuu decides to share his intel With Akino about the Celestial Abbey, in which she explains that it’s a European-originated group that works to provide redemption for everyone equally, but because demons are not included in their set of philanthropy, they don’t have mercy for them.

Later that night, as Akino is about to leave her office, speaking with Ayano on the phone, when she senses someone coming her way. it turns out to be the nun from the Celestial Abbey. The nun asks Akino about Kisara’s whereabouts; however, Akino refuses to tell her anything.

The nun is ready to force Akino to speak, when suddenly gunshots begin to shower at her, and the one behind the gun is no other than Ayano. Midway fighting with Ayano, the nun asks for Suu’s whereabouts and promises to quietly leave if they tell her where, but Ayano refuses.

The nun smirks, waving Ayano’s phone in front of her, telling her that she’ll manage and quickly escapes.

Under the bridge, Kisara suddenly starts receiving endless texts from Ayano; she annoyingly picks up the phone, sees the nun’s picture, and exclaims “Sharon” surprisingly.

On the other hand, Shuu is on his way home when he receives Ayano’s call, warning him not to go back to his place, but it is already too late; he Is already in front of his apartment.

The door suddenly bursts, throwing Shuu out of the window; the nun jumps on him and frantically attacks him. Shuu, unable to match her, is quickly defeated. She claims that he met her three years ago, but Shuu doesn’t remember.

Then Kisara makes a quick entrance, slashing her sword in the air; the nun evades it and later mocks her for losing to her in the past, making Kisara frustrated. Which gives us a flashback scene from the cave she was sealed in.

She remembers when Sharon stabbed her from the back in the cave, Shuu supported her and shot at Kisara’s back. The last thing she remembers is seeing them together before losing consciousness.

This episode was a total thriller; it ended at a huge cliffhanger. The appearance of a new character has made things a lot more complex and thrilling; it makes you question what is happening and how Shuu is related to this nun.

Why did he go to the cave with her, and what happened next? All these questions keep you absolutely hooked on the story, and you wouldn’t want to miss it. So, Stay tuned to find out more. I’ll see you in the next one! 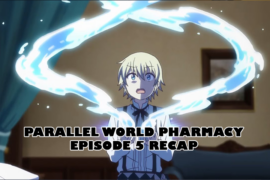